Digital Smoke Signals in the 2018 Midterms (In These Times) 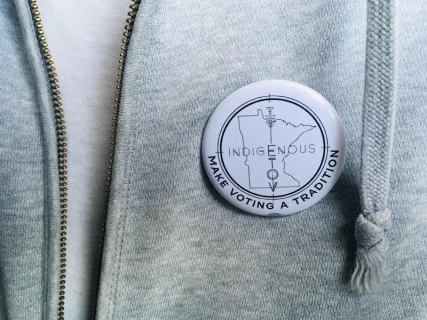 As Puri explained the steps, attendees dug into their cellphones and laptops and quickly created a succession of bots, videos, coded maps and other high-tech tools. The results looked to be effective weapons against the continual and extreme suppression of the Native vote, covered by In These Times and by Rural America In These Times, including here, here, here, and here.

“It’s the 21st-century moccasin path,” says Judith LeBlanc, Caddo Nation director of the Native Organizers Alliance, a nationwide forum for grassroots tribal groups that sponsored the workshop. OJ Semans agrees. He is the Rosebud Sioux codirector of Four Directions, a civil-rights group and the event’s cosponsor. “You have all been taught by your grandparents,” Semans tells the attendees. “Now you can use those lessons in the 21st century.”

The technology tools explored in the meeting are intended for reservations’ use during the 2018 midterm elections, which are perceived as critical for the nation as a whole as well as for Indian country. The tools may be particularly helpful for the scores of Native candidates who have declared this year for offices ranging from governor of Idaho and lieutenant governor of Minnesota to congressional representative from New Mexico.

By 2020, the complete range of tech tools should be fully operational and universally available for Native communities. According to Semans, some tools work better on certain reservations, while others may be most effective elsewhere. “We will learn as we go and customize as needed,” he says.

Learning to create short, vivid, crowd-sourced videos, and share them locally and with the press was one of the goals of the training by Puri, who is a director of Democracy Labs, a nonprofit he founded following the 2016 election. The group’s tagline is “New Ways to Win: We deliver technology and storytelling innovation to progressives,” and its trainings are pro-bono.

“This country has given us so much, but what is happening is not right,” says Puri. After he and his wife participated in the January 2017 Women’s March in Washington, D.C., he says they asked themselves, “What can we do to make a difference?”

Another training goal at the Minneapolis workshop was to come up with real-time solutions for election-related problems, such as a voter needing a ride to a registration office or the polls, unusually long lines at a polling place, or voter harassment. A voter or election observer could use voice or text to transmit the problems to a coordinator, who would snap them onward to individuals assigned to deal with the issue. For example, a get-out-the-vote driver would be dispatched to pick up the voter, or a lawyer would be sent to check on the excessive lines or harassment.

“You don’t need a call center with 50 people,” Puri says. “You can do all of this with one administrator and a laptop.” The simplicity and convenience of the technology tools makes them powerful. He calls them great equalizers in a country where money—really big money—monopolizes the conversation in politics.

Puri notes that the Native culture of storytelling is another advantage. “This means compelling narratives for videos they make,” he says, and this, in turn, enhances tribal members’ ability to get their message out.

LeBlanc calls Election Day a transitional moment—one that, with planning and work, can lead to a new kind of influence for Native communities. “Election Day is an exclamation point, the end of one stage and the beginning of another, when we bring people we have elected into our communities to understand our priorities. We can make the Native vote visible. We will ensure that we can show what we want done.”