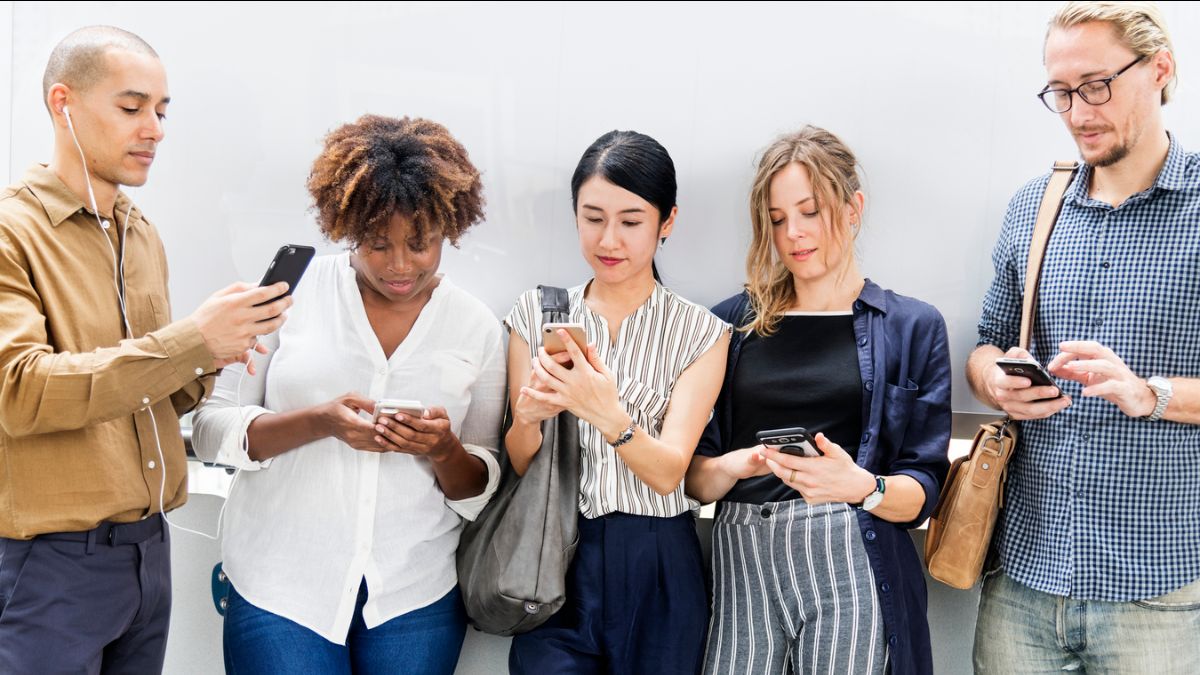 Reach voters on their phones even if you don't have their phone numbers with geo-targeting. Tips on running a smart, frugal campaign.

Background
"Bhuwan Pyakurel is running for the Reynoldsburg City Council Ohio. If he wins, he will be the first Bhutanese-Nepali to hold elected office in the country. Is there a last-minute digital approach to get him across the finish line ahead of next week's election? His area has a growing population of multi-ethnic immigrant communities that can benefit from in-language digital outreach", asked John Santos, AAPI & VMF Political Director, DNC.

This is how Bhuwan's team ran a winning mobile ad campaign to get-out-the vote (GOTV) in four days for under $300 with a little guidance from DemLabs. 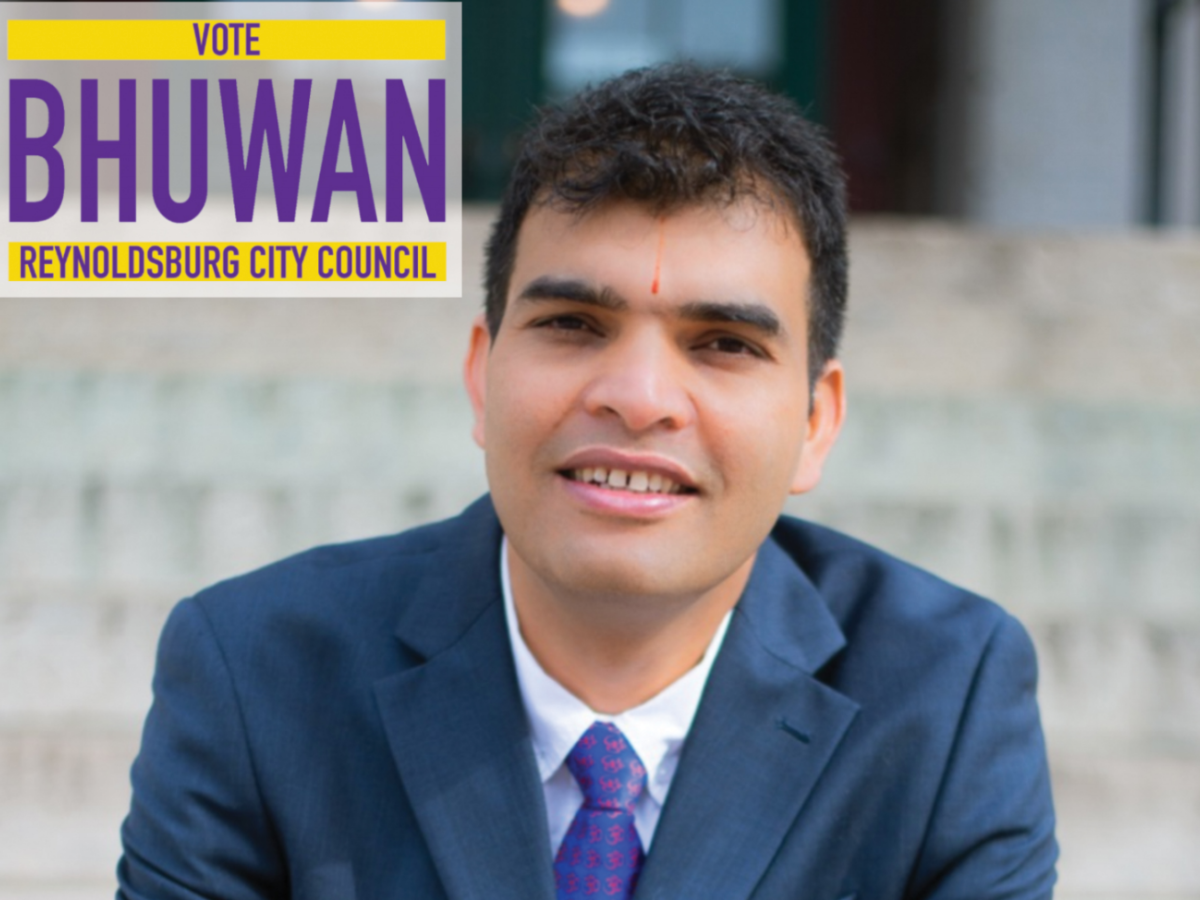 The basics
What is geo-targeting? Reaching people at the right time, based on where they are or have been. It's now possible for even small campaigns to launch effective, geo-targeted ads on a tiny budget of a few hundred dollars.

Is it legal? Yes. Facebook, Google and many other firms offer geo-targeted ad services. It's also possible to target constituents with mobile ads based on their voter file, a rally they've attended or some other place they have been in the past.

Are geo-targeted ads the same as texting? No. Mobile ads show up in apps on the user' phone rather than text messages. The ads can include graphics and videos, unlike text messages.

Is a phone number needed to send an ad? No. Geo-targeted ads are sent to Mobile Device Ad IDs (MAIDs) which are different than the recipient's phone number. This approach protects the individual's privacy.

How are MAIDs collected? Many mobile apps continuously send their owner's location to online services. The information is stored with the user's Mobile Device Ad ID (MAID) and not their phone number. Data brokers collect and resell this information on where and when a person was.

How are MAIDs used in an ad campaign? It's possible to buy the MAIDs for a particular location at a given time from these data brokers. Information can be refined by filtering on criteria such as age, income, gender etc. The selected list of MAIDs are then targeted with mobile ads which appear inside apps on their phone.

How much do geo-fenced ads cost? Mobile ads are priced in terms of CPM - or the cost to deliver a thousand ad impressions. The price of such ads vary based on how accurate the data is, the demand for such inventory and typically start from $5/CPM.

How does this compare to a traditional letter campaign? Mail campaigns require a mailing list, time to print and mail the letters. Geo-targeted campaigns can reach people who may or may not be on your list and can be launched within a day or two.

What is a typical response rate? The response rate will vary greatly based on the ad design, targeting accuracy and timing. Industry experts advise a 0.20% click through rate(CTR). That means for a 10,000 ads served (as in the above example), you might expect 20 people to click on the ad. This translates to $100/20 or $5 per click. All 1,000 people will see the ad multiple times, but expect only a small % will click on it. 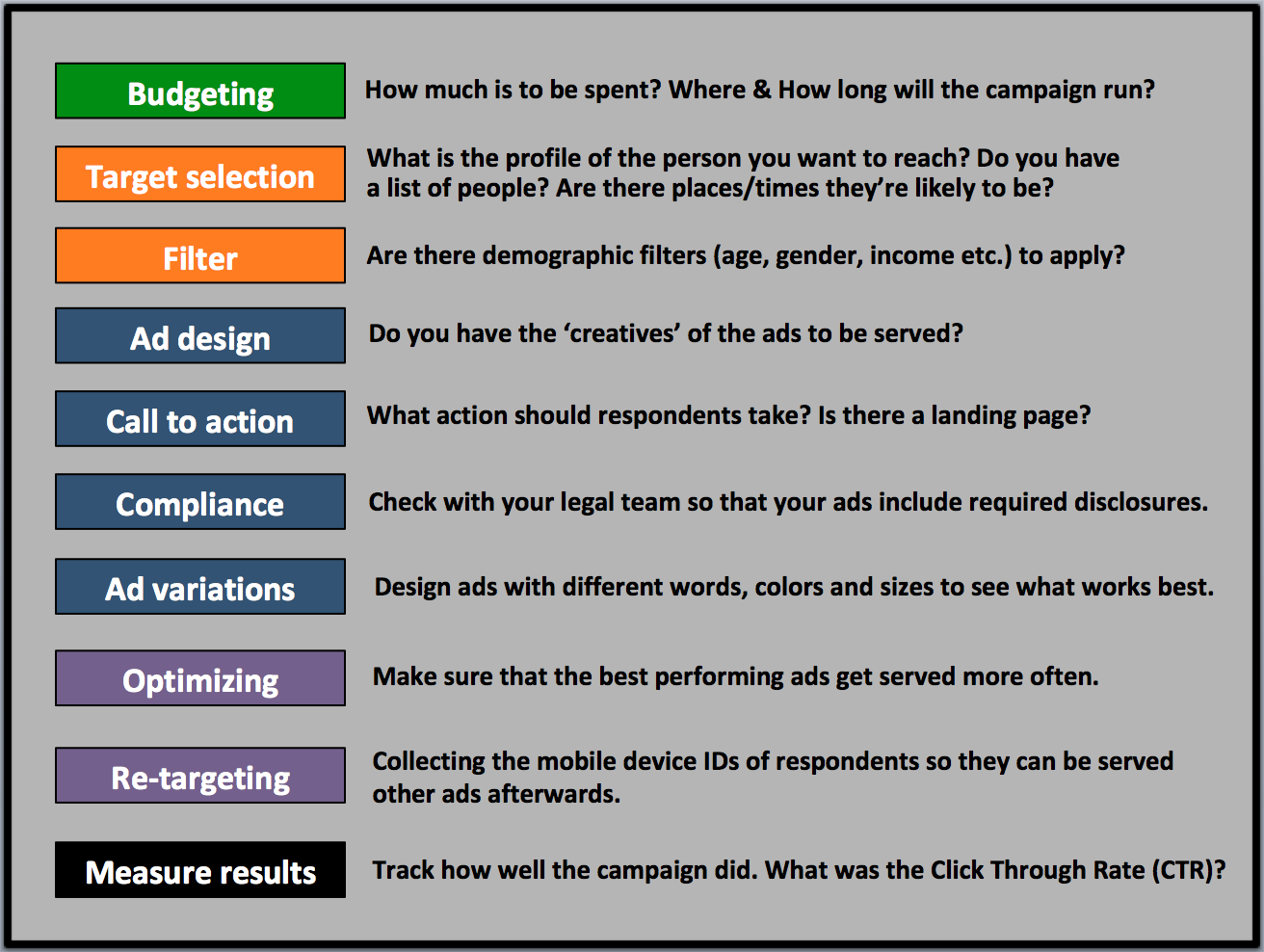 How Bhuwan's team did it
List creation. They prepared a list of their most likely supporters and used an ad server to find the corresponding Mobile Device AD Ids. A MAID is found by matching the voter's address with the phone billing address. An average match rate (of many addresses can be matched to MAIDs) is about 65%. Ad servers will typically include this as part of their service.

Ad design. They created basic ads in different sizes to see which would perform the best. They used Canva, a free app to design their ads that included a compliance reporting message. People who clicked on the ad were directed to the campaign's Facebook page.

The Ad serving bureau monitored and automatically adjusted the ads being delivered to maximize the response rate. Ads that got the most responses were served more frequently. 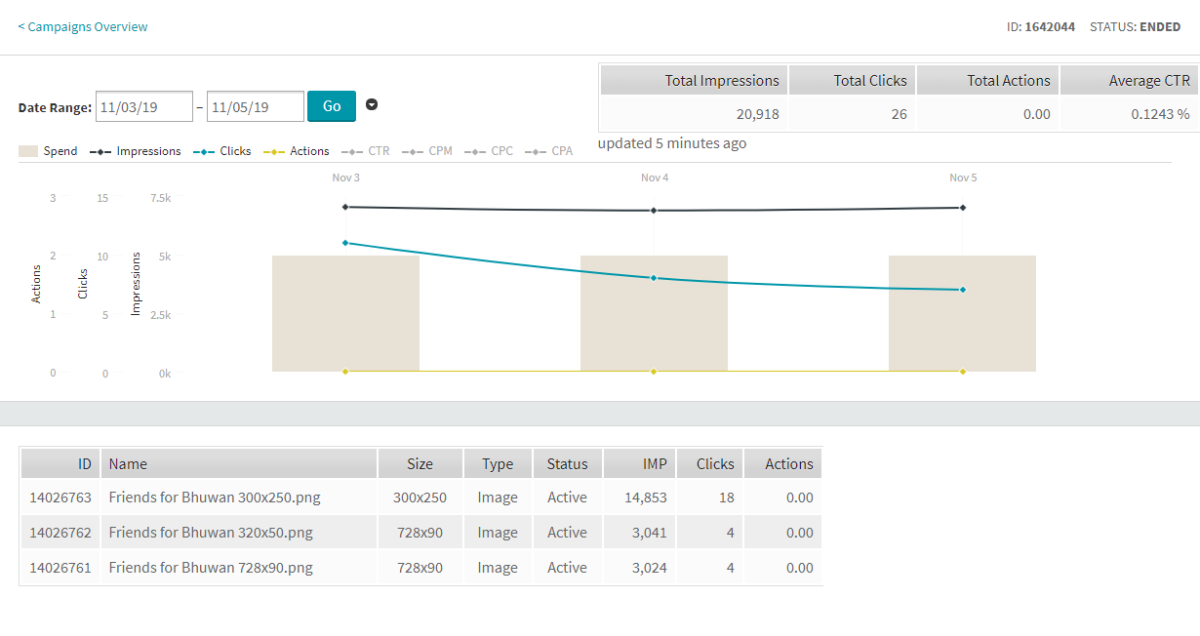 The campaign report shows:
A total of 20,918 ads were served in the time period between Nov 3-5.
The 300x250 pixel ad performed the best and generated 18 clicks.
Once this was recognized, this size ad was served the most often.
The average click through rate (CTR) of how many people clicked on ad was 0.124%
The campaign reminded supporters to go vote, even if they did not click on the ad.

Please share this bulletin. DemLabs is a SF-based, progressive hub for ongoing technology and creative innovation. We focus on free and affordable apps. Donate here to support our work.