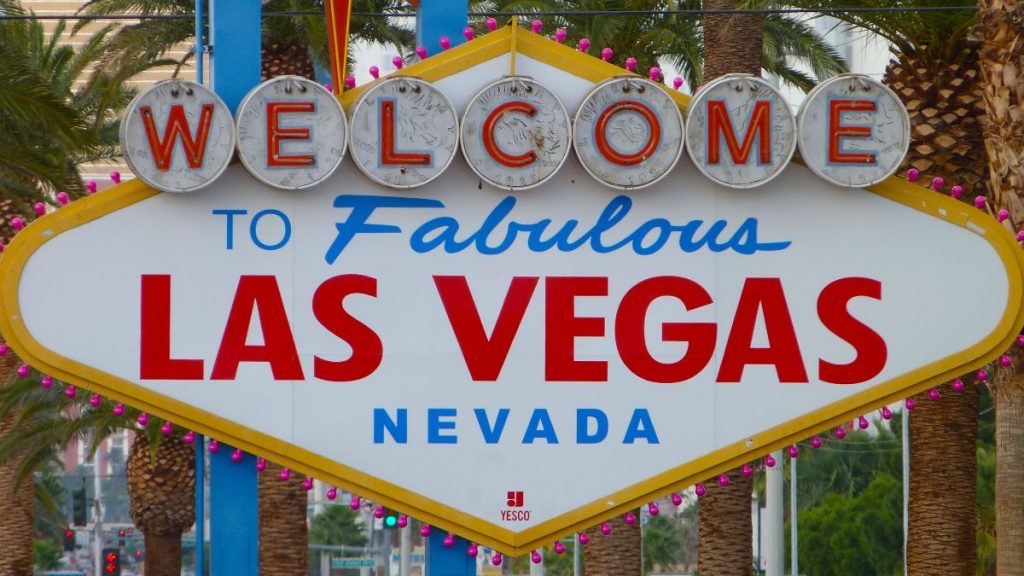 Make the Road Nevada is fighting in solidarity with Windsor Park residents as the City of North Las Vegas is proposing to sell 80% of the land of Windsor Park, a historical African American community to a large real estate developer. This would destroy the community and the dreams of the residents.

They are using free apps for their innovative zero-budget grassroots campaign.

Background
The City of North Las Vegas is proposing selling the land of Windsor Park, a historical African American community to a large real estate developer. This would destroy the community and the dreams of the residents.

The City received a community block development grant in 1989 so that 'residents wishing to do so can continue to enjoy living where they have made their investment'. The City Council has denied permits to the residents to rehab their properties and is now proposing to sell 80% of the 86 acre property to a large real estate developer.

"The City later claimed the livelihood, needs, the health, and preservation of the close-knit community was too expensive and they let it turn into a wasteland", explained Lalo Montoya the Political Director of Make the Road Nevada which is supporting the effort of the residents to block the destruction of the community. "We stand with the fifty-six residents remaining and fighting to get what they were promised".

Community organizing
How does a small grassroots group like Make the Road Nevada with few resources, push back against such powerful interests? Lalo decided on a four pronged approach:
1. Record community voices and use those videos to bring public support against the sale. They used two free apps to collect video comments (FlipGrid) and then edit the clips into a campaign video (Lumen5).
2. A petition was created to rally support  and collect details on supporters (Action Network).
3. Research the records to hold the City accountable to its commitments.

1. Harness the outrage
Lalo decided that personal stories from the families who would be most impactful. They had no budget for this campaign and decided to use free apps to collect videos and edit them into a minute long campaign video. They used FlipGrid to collect video comments from community residents on the City's proposed sale of their land to developers. The video clips were edited into a campaign video that includes free stock video and music using Lumen5. The video was shared through Twitter. 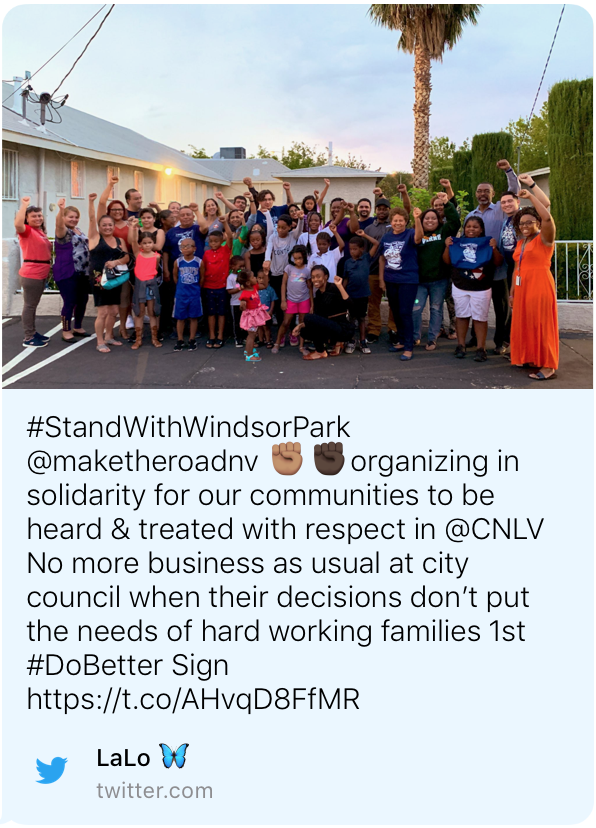 2. Mobilize the community
Make the Road Nevada launched a petition drive on Action Network to build support in favor of blocking the sale. The petition (in both English and Spanish) made the issue clear.
"To: North Las Vegas City Council  From: [Your Name]

The City wants to sell the dreams of the residents to a big developer, the sale would be 80% of the neighborhood, leaving the residents with nothing. The City Got Federal and State money based on these promises, and they broke these promises, because they didn't want to pay to help them. They claimed the livelihood, the needs, the health, and preservation of their close knit community was too expensive and they let it turn into a waste land. Fifty-six residents still remain and they are willing to fight until the end to get what they were promised." 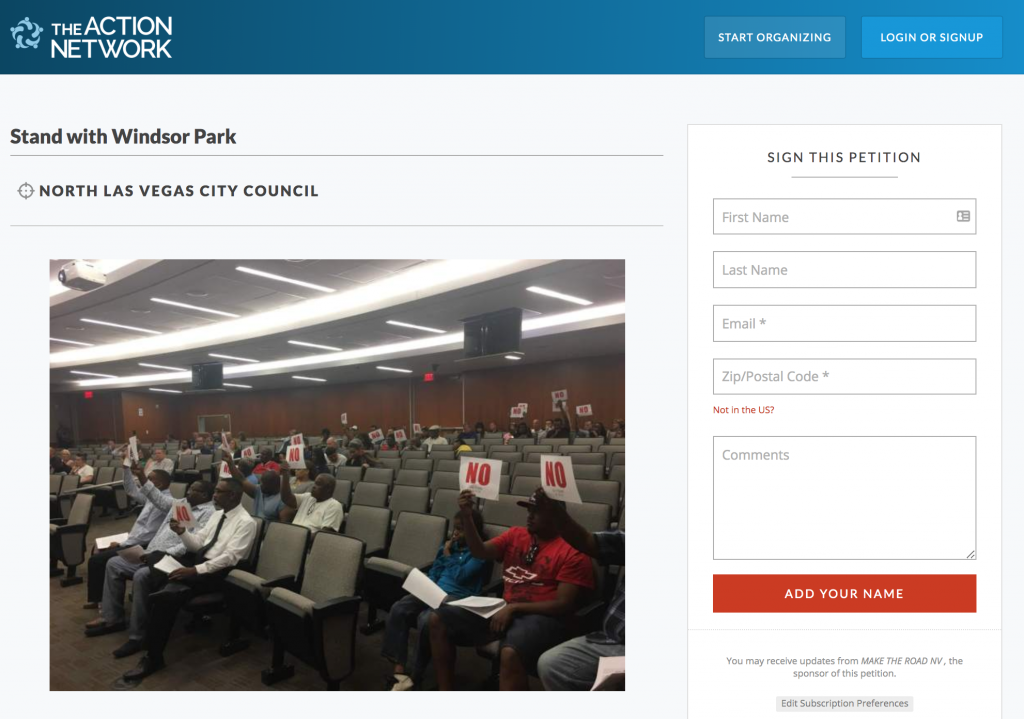 3. Research
Lalo's team researched records to find the original commitment that the City made in order to get a block grant. Note #2 which states "... residents wishing to do so can continue to enjoy living where they have made their investment".

How 'Opportunity Zones' hurt low income communities
How are 'Opportunity Zones' regulations being used to rezone Windsor Park and destroy a disadvantaged minority community? And transfer wealth to rich real estate developers?"A Trump administration tax break designed to spur investment by the affluent in low-income neighborhoods may be rewarding investors for infusing their money into already gentrifying areas where no incentive is needed, including two highly-prized locations in Nevada.

Opportunity Zones, established by Trump’s 2017 Tax Cuts and Jobs Act, allow investors to reinvest capital gains and avoid taxes by putting their money into low-income areas in need of investment, as designated by the nation’s governors. 'Congress had previously tried similar approaches with Empowerment Zones and Renewal Communities. But its latest effort is remarkable for its lack of a governmental oversight role and for its generosity to investors,' wrote Steve Rosenthal of Urban-Brookings Tax Policy Center in a Forbes article last year.

But Opportunity Zone selections were based on census data between 2011 and 2015, when Nevada was emerging from a crippling recession.  Some of the tracts designated last year by then-Gov. Sandoval have rebounded — meaning investors will receive tax benefits for pouring money into neighborhoods that likely would have prospered regardless." - Nevada Current.

"NLV scraps plan for warehouses surrounding sinking neighborhood. Since this item came before the Planning Commission, I’ve heard from the residents about their opposition to this project and I just agree with them,” said Goynes-Brown, who did not say what caused her change of heart, but says she’s expressed her concerns to the developer."

“I think one of the most important duties of an elected official is to represent his constituents and make decisions on shared input from numerous stakeholders,” she said. “Right now this is just something I’m not comfortable with. I don’t think it’s the right project for this neighborhood”, Dana Gentry reported in the Nevada Current.

Donate to Make the Road Nevada

The right tools in the right hands make all the difference when you're fighting powerful interests. Lalo Montoya and Make the Road Nevada team show what's possible with tech-savvy community organizing. Learn more about the free apps they used here.