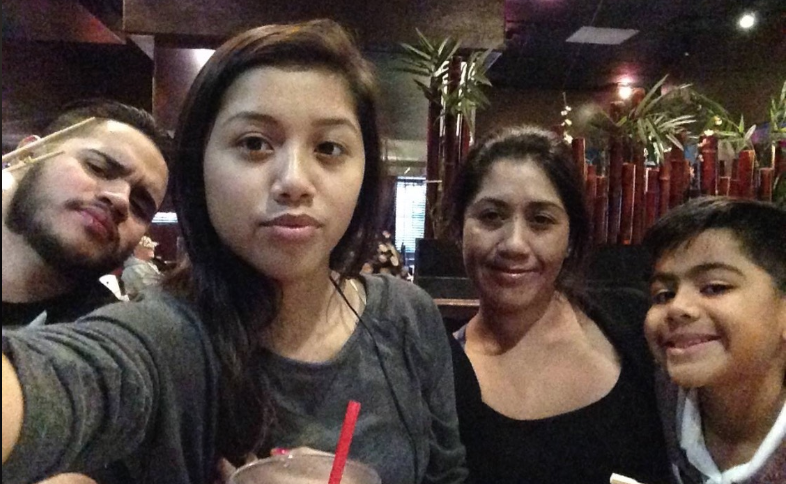 A rapid community response is needed for imminent threats.

Make The Road Nevada (MTRN) a grassroots group, decided to ask community members for video comments about a single mother being threatened with deportation. They had to move fast without a video budget. Here is how they did it using only free apps, mobile phones and a laptop.

Background
"Adriana Arellano Cruz was detained by ICE officers on Thursday, July 11, 2019. Adriana was first detained 6 years ago for traffic violations which turned into an outstanding warrant for her arrest. When she was pulled over and arrested, LVMPD transferred her over to Henderson detention center. She was able to get out and has been fighting her case, but her previous attorney didn’t do anything to help her. Adriana didn’t know she had a final order of deportation and on Thursday, July 11, 2019, on her way to work, she was pulled over and taken into custody by ICE officers.

Adriana is a mother of three U.S. citizen children. They are all in school and the eldest works to financially help the family. The Arellano Cruz children have not been able to see their mother since she was detained. The same day they were separated from their mother, the Arellano Cruz children received an eviction notice. They have nowhere to go and they don’t have any family in Las Vegas", shared Make The Road Nevada. 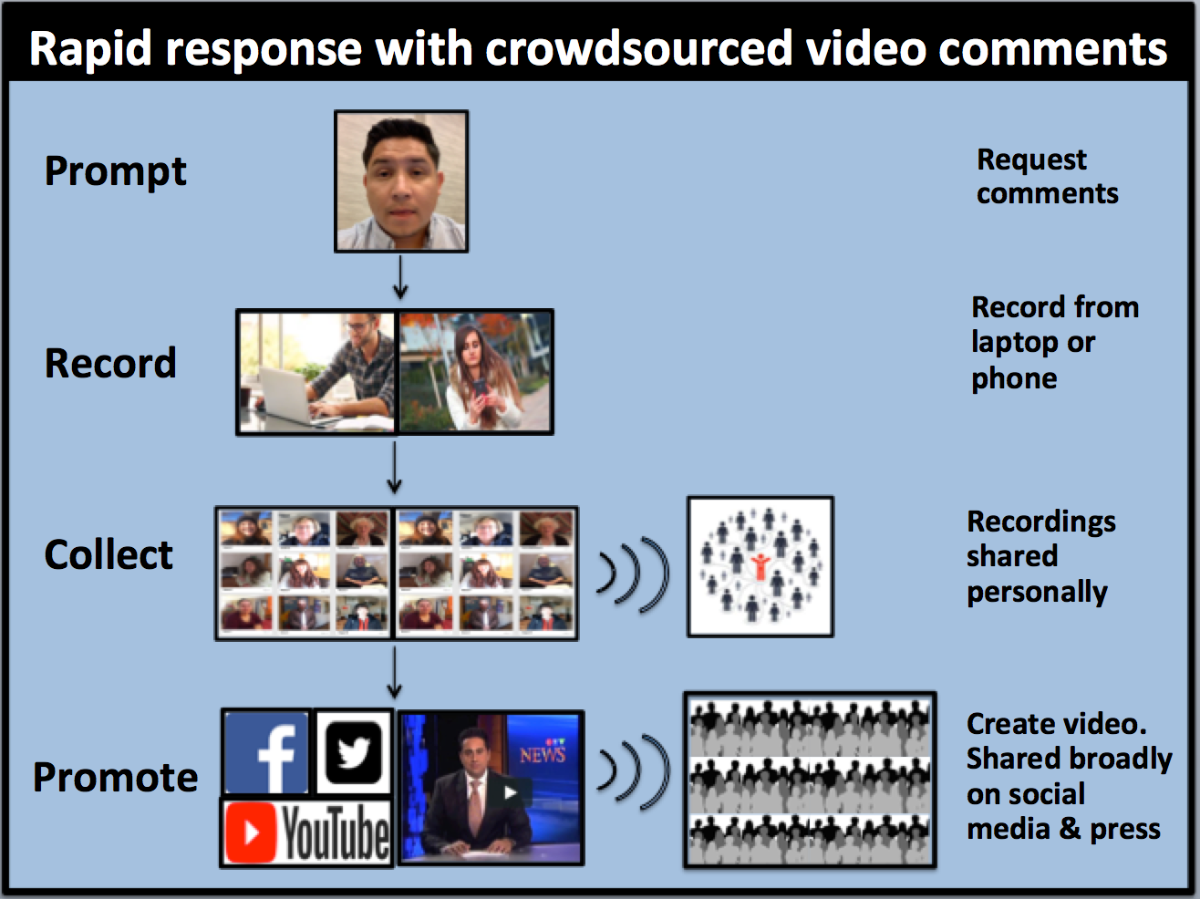 How the rapid response video was created

- MTRN recorded a short (20 sec) video prompt on an iPhone explaining what had happened and encouraging community members to record their thoughts.
- A 'link' was created with this video prompt using the free Flipgrid app. This link includes details on the incident, how long the recording should be and a link to donate to Adriana's campaign through GoFundMe.
- The link was shared with the community through social media, texts and email.
- Videos recorded by community members were automatically received by MTRN. Respondents were encouraged to share their own videos through their own social media accounts as well.
- A one minute campaign video was created using Lumen5, a free app. This video includes free professional video clips and a sound track from the Lumen5 catalog, in addition to videos collected from the public using FlipGrid.
- The "Adriana Belongs Here" campaign video was then shared through social media.
This video was made in less two days by volunteers without professional video skills - using only smartphones, laptops and the free Flipgrid and Lumen5 apps. 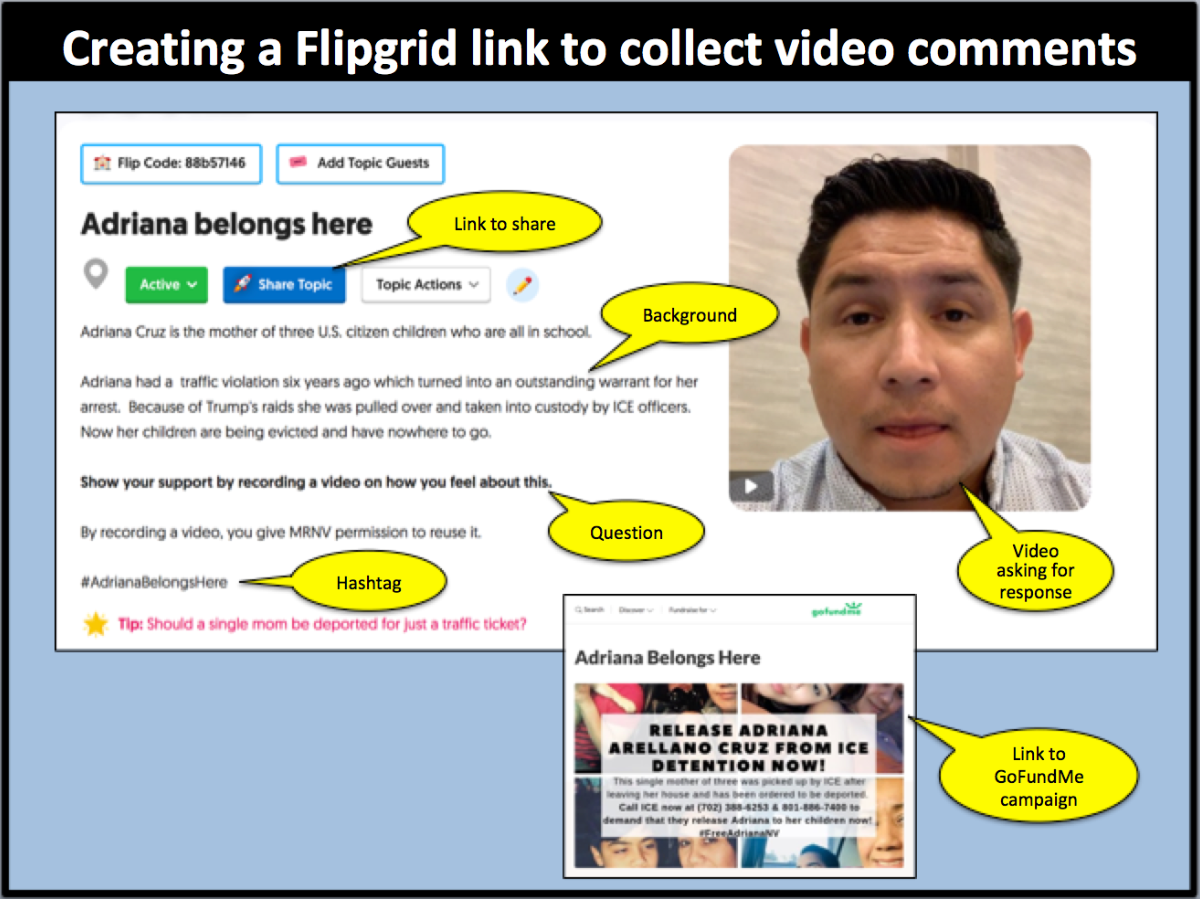 Reach matters
Corporations control the major media outlets. Advertising on social media platforms is too expensive for most grassroots groups. Paid social media influencers and bots drown out other voices. How can small grassroots groups get their message heard to mobilize support in this environment?

Authentic, relevant and timely content is part of the answer. The message should ideally be in video format, optimized for distribution through social media and watching on phones. Corporate media's power to determine what issues to cover will be loosened when more grassroots groups get their messages heard.

The need for speed
Elected officials and the authorities need to hear from the public. Rapid-response videos give the community a voice. However, grassroots groups lack the funds, time and expertise needed to produce persuasive videos quickly. Free, innovative apps like Flipgrid and Lumen5 are changing that. Now even small grassroots groups such as Make The Road Nevada can quickly spread their messages and mobilize supporters. Learn more on how to apply this approach here.