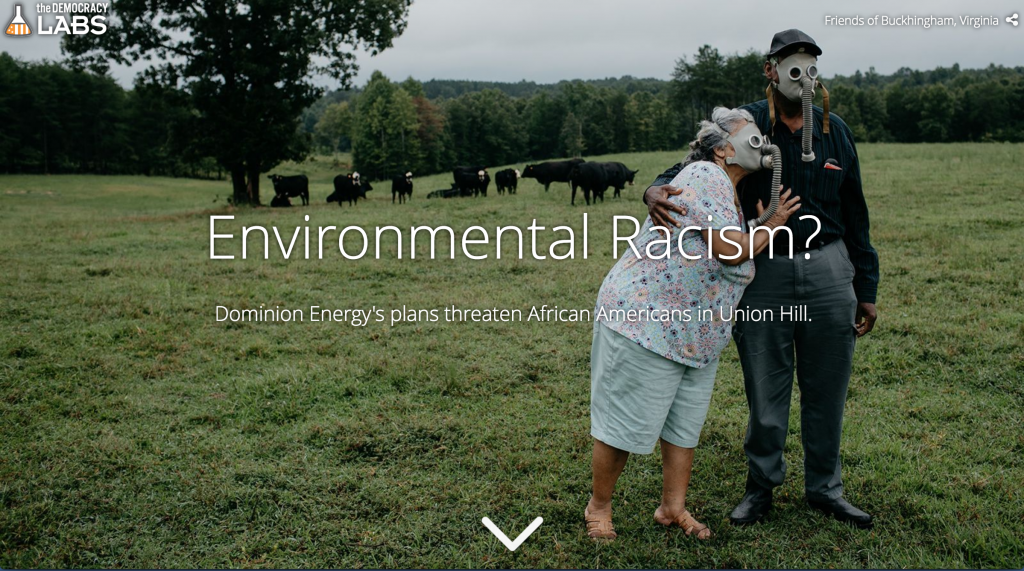 Powerful corporations hire marketing experts and lobbyists to push their agenda. How does a small community group get the truth heard in such an uneven fight?

Here is an example from a small group fighting to block Dominion Energy’s plan to build a hazardous compressor station in a low-income, heavily African-American community. Digital storytelling is key in their plans to gain mindshare and build public support.

Background
Dominion Energy is the largest utility provider in Virginia. It is also the largest corporate donor in Virginia state politics and part of the Atlantic Coast Pipeline (ACP) consortium that has proposed a lucrative 600-mile natural gas pipeline from West Virginia through Virginia to North Carolina. The project will seize land by eminent domain and cut through farms, forest, fields, rivers and streams.

Compressor stations are needed to move the gas through these pipelines. Dominion is proposing to build a station on a 65-acre site in Union Hill that would expose nearby residents to toxic gases and dangerous explosions. Union Hill is 87% African American, all with deep long roots in the community and some of whose ancestors bought this land and their freedom before the end of the civil war.

Why was this site chosen for the largest compressor station every proposed by Dominion? “This is a predominantly black community where you have less clout and less voice… That’s the way the industry does”, explained Pastor Wilson, at the Union Hill Baptist Church in the Virginia Mercury.

Digital storytelling
A clear narrative was needed to present the truth and encourage residents to attend a public Air Board hearing that would vote on the compressor station. The narrative had to be quickly prepared on a tiny budget, easy to understand and share online. DemLabs worked with local activists to design an interactive Stand With Union Hill StoryMap combining locally collected images and videos with  data analysis to highlight:
1. Environmental racism
Exploiting the little economic and political power of the low income African American community in Union Hill wasn’t fair. Videos analyzing the impact of the compressor station from independent sources were incorporated into the narrative.
2. Clean Power
Why does Dominion Energy focus on dirty power sources rather than on clean solar power which was common in neighboring states of NC and MD, but not in Virginia? Different power generating stations (coal, gas, solar) were mapped along with pipelines to show how few clean power sources Virginia has as compared to neighboring states.
3. Faulty information Did the Federal Energy Regulatory Commission (FERC), fully assess whether minority, low-income groups would suffer more than others from the station? Data from the US Census and other sources was mapped which confirmed the high concentration of African Americans in Union Hill.

You can see other examples of StoryMaps from Voter Participation Center, the Jon Tester campaign and People Demanding Action here. Contact DemLabs to learn how to apply digital story-telling tool for your campaign.

Democracy Labs is a hub for ongoing technology and creative innovation that serves progressive campaigns and organizations at the national, state, and local levels. Donate here to support our work.