See something, say something using technology to report voting problems

The midterm elections showed the need to expose voter problems in real time, on election day, in time to do something. We need a new approach to citizen reporting. Not just posts on social media that can get lost or drowned out by trolls. But a streamlined approach to collect, curate and expose what’s going on with the help of the press. Analyzing voting problems from a bird's eye view reveals patterns that are not readily visible at ground level.

Effective citizen reporting is a challenge. How can voters be equipped to easily report voting problems? How can these reports be screened quickly to spot patterns of irregular activity? How can all this be done within a news cycle?  SeeSay (See Something, Say Something) draws public and media attention to issues that may otherwise be lost in ‘noise’ or spotted too late to do anything. It accomplished this during the midterms with support from Samantha Bee, Win The Future, Rock The Vote, NBC, OSET Institute, ESRI, Center For Common Ground, Democrats.com, Rogan’s List and Voter Participation Center. Voters requiring urgent or legal help were referred to hotlines managed by Common Cause.

DemLabs designed SeeSay in two weeks with a small team and a tiny budget using readily available software. Voters reported 1,133 problems on Election Day which yielded 623 valid reports. 63 incidents were highlighted as press-worthy and shared with the media. The voting problems dashboard has already had over 249,000 views.

Citizen reporting works by drawing public and media attention to the issues that really matter. SeeSay collected voting problems in this case, but can also be used for other applications as well. Two other projects now use it to collect reports of pollution and hate crimes. 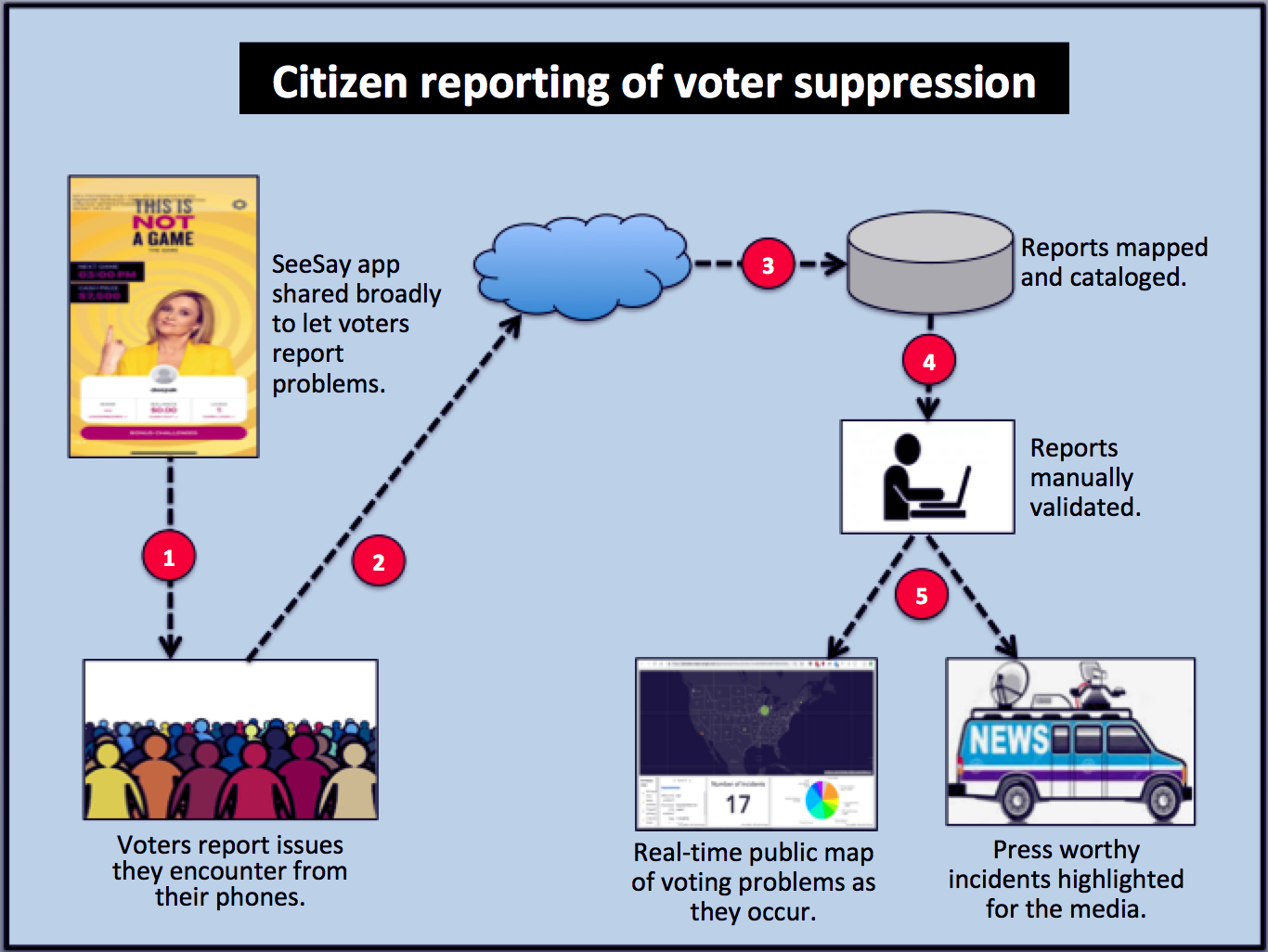 Technology
Using existing software was the only viable option, given the short lead time and tiny budget. The software had to:
1. Let voters easily report problems from any phone.
2. Handle a large number of entries in a short period of time (on election day).
3. Allow voters, volunteers, partners and the press to remotely access the system.
4. Present findings of voting problems in a clear, easy to understand manner.
5. Have strong security to protect the data collected from being hacked.

ESRI software was used for this project: Survey 123 for data collection, ArcGIS to screen the submissions and map them along with StoryMaps to visually report the findings.

Engaging citizen reporters
Broad distribution of this app was vital. SeeSay was shared through different channels.
Television: NBC encouraged viewers to report voting problems using the app so that they could share the results in their election day coverage.
Mobile games: Samantha Bee’ mobile game This Is Not A Game is hugely popular with over 350,000 players. WTF added SeeSay as a ‘challenge’ to the game before the MidTerms and players won prizes for reporting voting problems.
Social Media: Samantha Bee tweeted SeeSay reported incidents, to encourage other voters to share voting problems they encounter.
Website: Rock The Vote promoted SeeSay on their website.
Email: Democrats.com, Center For Common Ground and Rogan’s List shared SeeSay with millions of readers.

Processing
Reports of voting difficulties from SeeSay users streamed in on Election Day and were mapped automatically. They were stored in a ‘holding area’ for review. Bogus submissions were flagged manually while other reports were researched further for more details. Press worthy incidents were tagged to make it easier for the media to spot and investigate further.

Reports of voting difficulties were displayed on an interactive, nationwide map which was continuously refreshed with new reports. Results could be viewed by the nature of the voting problem (long wait times, intimidation, poll worker issue etc) making it easier to spot patterns of voting problems. Clicking on a dot reveals more details on a specific incident. 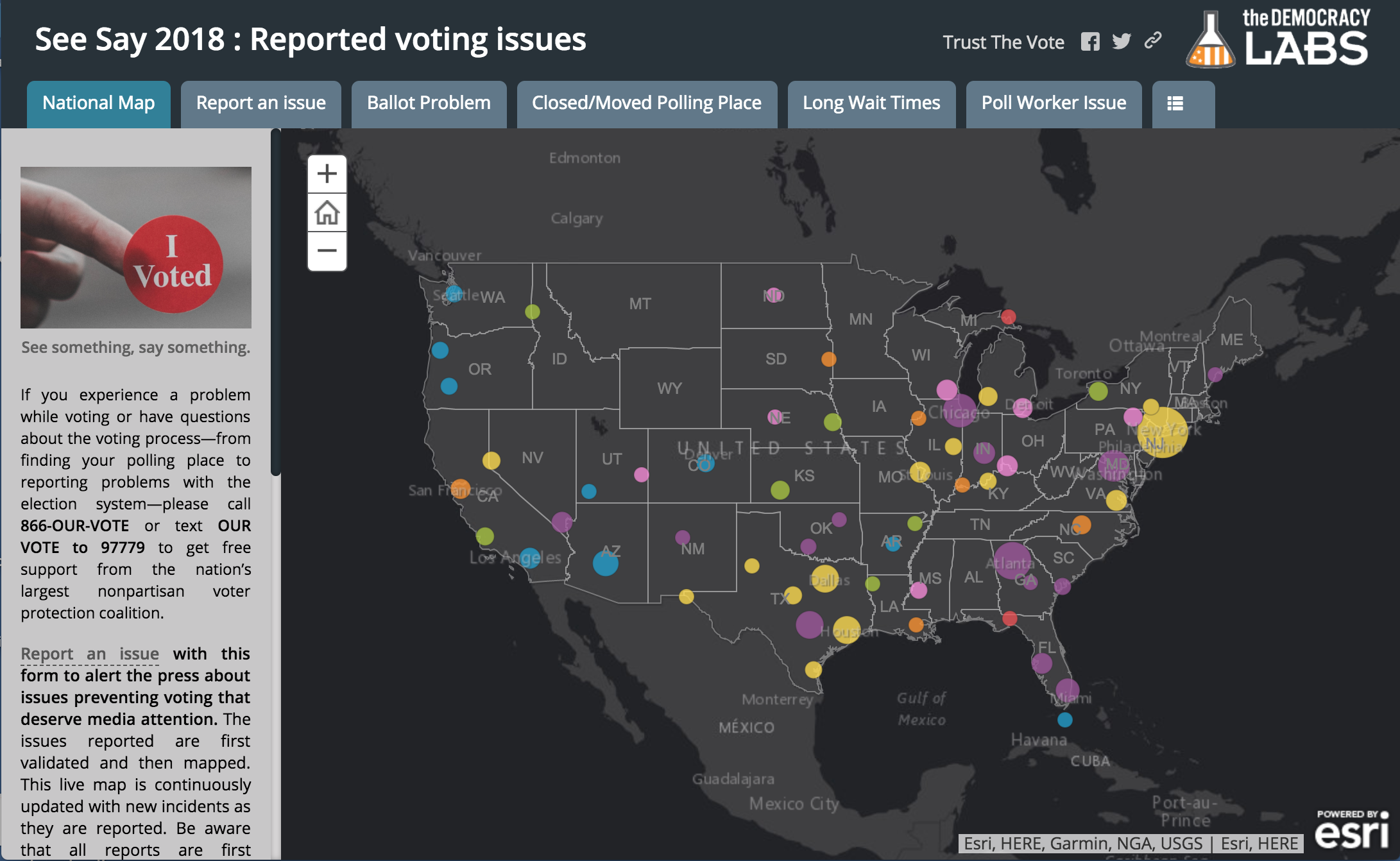 Design
How does SeeSay differ from posting an issue on Social Media? Issues reported through social media are often lost in the ‘noise’ from trolls and don’t get the attention they deserve unless the author has a large following. The press may not notice incidents reported on social media in time. SeeSay provides curated citizen-reported, content on an issue for the public and press.

How does SeeSay relate to existing hotlines for voters get legal help? SeeSay isn’t meant to handle individual voting incidents requiring legal help which are better handled by hotlines. SeeSay is ideal to detect patterns in voting problems in real-time and to bring news leads to the attention of the press.

Can the system scale to handle thousands of simultaneous users? The ESRI ArcGIS software platform used for this project scales well and has been tested in disaster recovery situations like Hurricane Katrina with even more users.

Next steps
Incidents of police brutality reported through social media draw public attention and get further scrutiny. But there are hundreds of other important issues that don’t get press attention. Traditional news sources like print publications are strapped for resources and stretched thin on how to cover issues that matter to people. Social media is a public forum but often rife with trolls that block urgent issues.

Citizen reporting meets this need. It helps both the public and the press by drawing attention to the issues that really matter with crowdsourced intelligence gathering. SeeSay shows how it can be done.