All Votes Count. Some Just Count More Than Others. 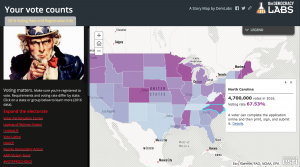 The right to vote is under attack.

Confusing requirements and other hurdles are designed to discourage specific groups from voting. And turnout drops with voter suppression, as the 2016 election shows. Here are just of some of the hurdles:
- Complex voter registration requirements
- The risk of being purged from the voter rolls
- Obtaining the proper voter ID needed to vote
- Hard to reach polling stations and limited voting hours

Voting is non-partisan. Even the Great Communicator said, "For this Nation to remain true to its principles, we cannot allow any American's vote to be denied, diluted, or defiled. The right to vote is the crown jewel of American liberties, and we will not see its luster diminished".

Groups are responding to make it easier for more Americans to register and vote. The Voter Participation Center (VPC) for instance, helped a million voters register in 2016. But, there are still over 50 million people of color, unmarried women and millennials who aren't registered to vote. 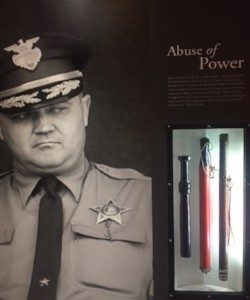 Until 1965, counties in Alabama usedpreventive measures to stop African-Americans from registering to vote. Only 2% of the African-American population of Dallas County was able to vote. Civil rights protests in Selma were met with violence.

James Clark Jr., the sheriff of Dallas County was responsible for much of the violence against civil rights protestors in the Selma to Montgomery marches in 1965". This is on display at The Selma Interpretive Center is a living memorial to the struggle to let all Americans vote.

Voting can be suppressed with batons - or regulations. The result is the same.

StoryMaps
Complex issues like voting regulations and their impact on elections are hard to explain. StoryMaps provide an effective way to visualize an issue, understand it and find information.  "All Votes Count" (developed with support from VPC and Esri) is a simple, interactive StoryMap that's easy to understand and share. It's online and continuously refreshed with new information.  It provides a lot of information including:
- State voting requirements with links to State Board of Elections for more details
- The impact of regulations on voting participation
- Groups helping voters register and get the correct ID needed to voteDrop us a line if you need help designing your own StoryMap. DemLabs is a non-profit hub for innovation and information exchange for progressives. Support our work by donating here.