You're suddenly stopped for questioning... 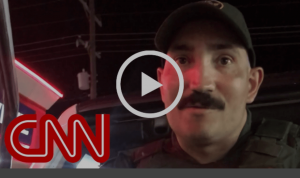 People get stopped for questioning anywhere these days - speaking Spanish in Montana or resembling someone in Oregon. Others encounter sexual harassment, racial discrimination, voter intimidation...

How can these encounters be recorded discreetly and help summoned without pulling out a phone? Develop a new app is a common reaction, but often it's smarter to first check for existing apps, even if they were originally developed for some other purpose. Here's how DemLabs looks for solutions with discreet recordings as an example:

1. Define the functional requirements
- A means to transmit an alert including location without using your phone
- Allow the user to specify who should be alerted in the event of an incident
- Small. Easy to use. Affordable.

2. Establish the acceptance criteria
- Any device which requires its own cell plan would be too expensive
- An app by itself isn't acceptable because it requires using a phone which isn't possible if stopped suddenly
- A phone could send the alert, but how could it be activated remotely?

We researched existing solutions to find personal protection devices. Although originally designed for family safety and joggers, they also work well for this application. These devices use a small, discreet tag that's worn or carried on a keychain. The tag communicates via Bluetooth to the user's phone which remains in a purse or pocket. Pressing the tag sends a Bluetooth signal to an app on the phone which sends an SMS alert along with the user's location to the list of designated contacts. The Wearsafe Tag is one such tag that also streams an audio recording of the encounter and costs just $5/month.

Paraphrasing the X-Files, the solution is out there, but finding it requires research. DemLabs believes that progressives can do more, faster and for less money by using existing apps, rather than re-inventing new solutions.

We're a non-profit hub for innovation and information inter-change for progressives. Help us support more progressive groups and evaluate more solutions by donating here. Thank you!